I have another finished piece to share with you this week. I stitched this piece last year while my husband and I were watching all the episodes of “Star Trek Enterprise” on streaming video. He had never seen the show before. I had watched it when it originally aired, but there were a lot episodes in the later seasons I had not seen. So, I worked on this project while we watched television. I’m only just sharing it now because I took such a long break from the blog — I’ve got lots to catch up on! 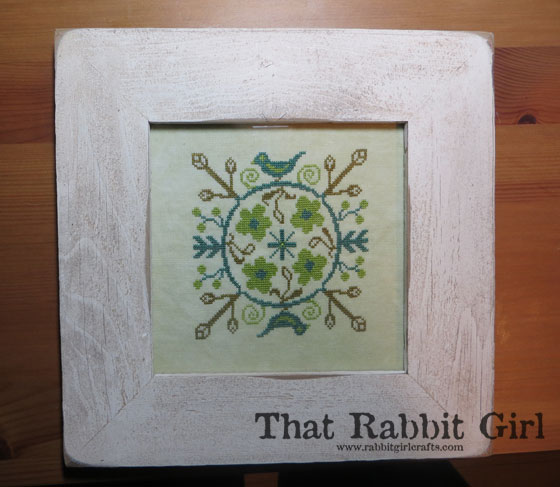 The pattern is “Sylvania” by Summer House Stitche Workes. I came upon this pattern at my local stitch shop. I was not previously familiar with this designer, but “Sylvania” was a lot of fun to stitch, and it worked up pretty fast. I see Summer House Stitche Workes has other patterns that seem to belong to this series. I especially love the “Sophia” pattern, and I think it would make a great companion piece to this one.

I framed “Sylvania” myself, and the frame is another one that I bought from All Barn Wood.

I’m happy with how it turned out, although I still haven’t found a place to hang it in my home. For now it sits on the floor, leaning against the wall in my little home office space.

Thanks for stopping by!